We here at the Dutch Connection Farm pride ourselves in having the most beautiful and unusual Breda chickens in the colors Black, Mottled and the very rare color Chuckoo!!

The breed has been around since the early 18th century and was most likely created from crested fowl which have been found in the Netherlands from the middle ages on. It is general believe that their likely early roots are from south eastern European countries like Italy and Turkey mixed with Sultans who have been in the Netherlands for centuries as well.

Just like most local breeds, the introduction of the Hybrid chicken around the turn of the last century meant that farmers were no longer interested in the heritage breeds we love so much, and their number went into steep decline until they where almost extinct.  That is, until conservation efforts were made to preserve them, we have to mention the Dutch BKU Club amongst others.  At the time they were most commonly known and referred  to as "Guelderlands", or simply as "Guelders" in this country. This breed has been newly re-introduced, though still in small numbers around the world and still very much endangered even in their home country.

They are family friendly, docile , hardy and they are good foragers. These are very large birds, with feathered legs that extend to their toes and large vulture hocks. they lay white eggs and are good meat birds. This breed has a non existent comb which is typical for only this breed, and is heavily feathered, so frost bite is not an issue in cold climates. There is a bit of a crest where the comb would naturally be present. They have a hawk-like  or vulture type beak that sets them apart from most other chicken breeds. The can grow as big a 10lbs, although the average bird will be around 7lbs to 8lbs.

The Breda, (Kraaikoppen) make a great exhibition bird for 4-H because of their calm, yet alert demeanor. There is no American Poultry standard set for the Breda, for now it's a work in progress, we are however breeding to the Dutch Standard and are current members of the BKU Club, ( Brabanters, Kraaikoppen en Uilebaarden). 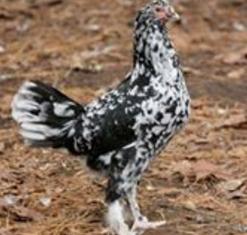 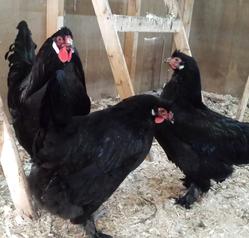 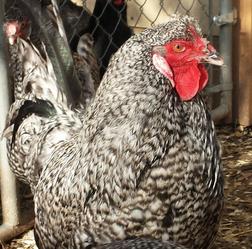 For more information or to place an order 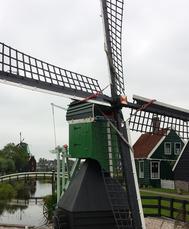